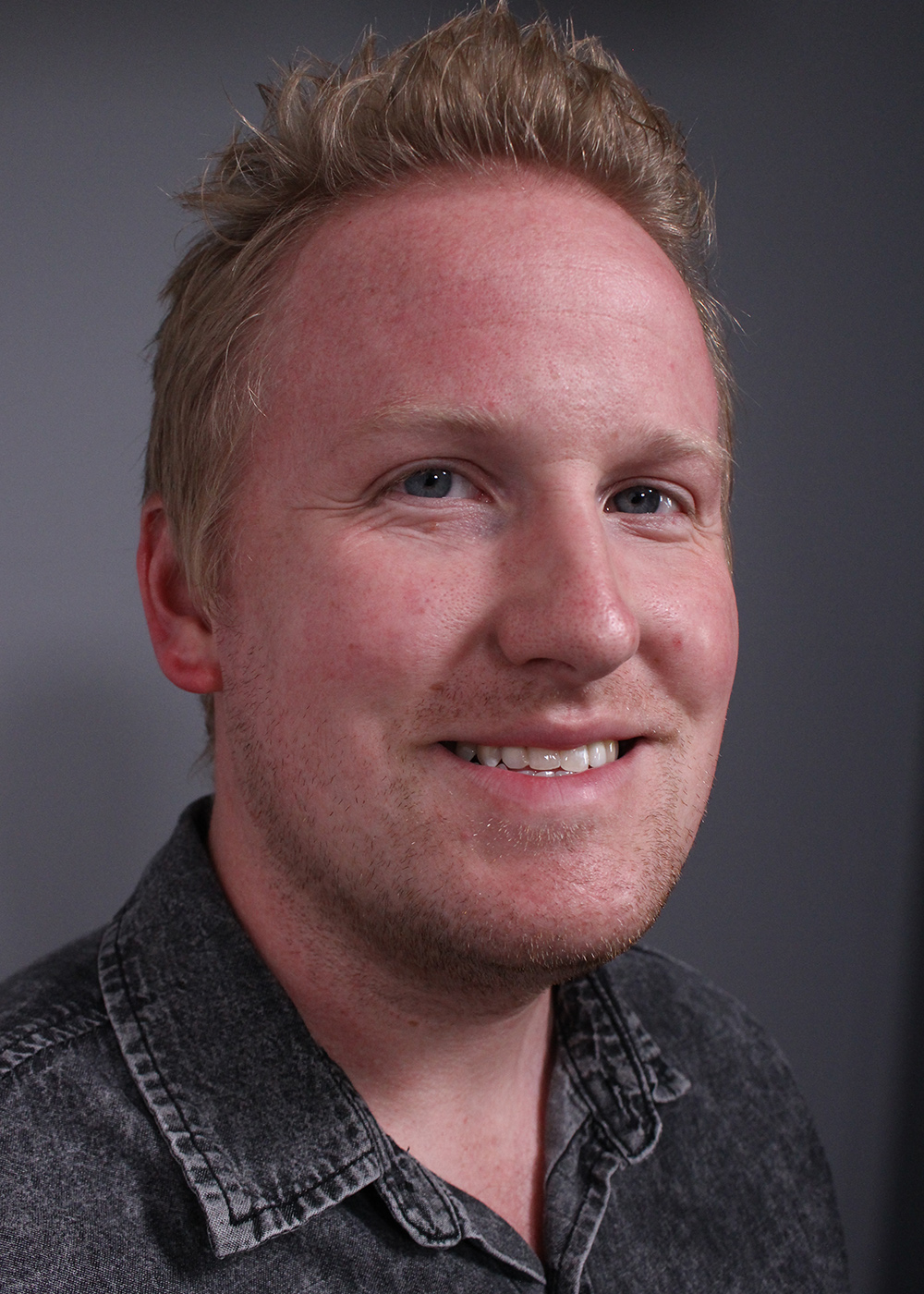 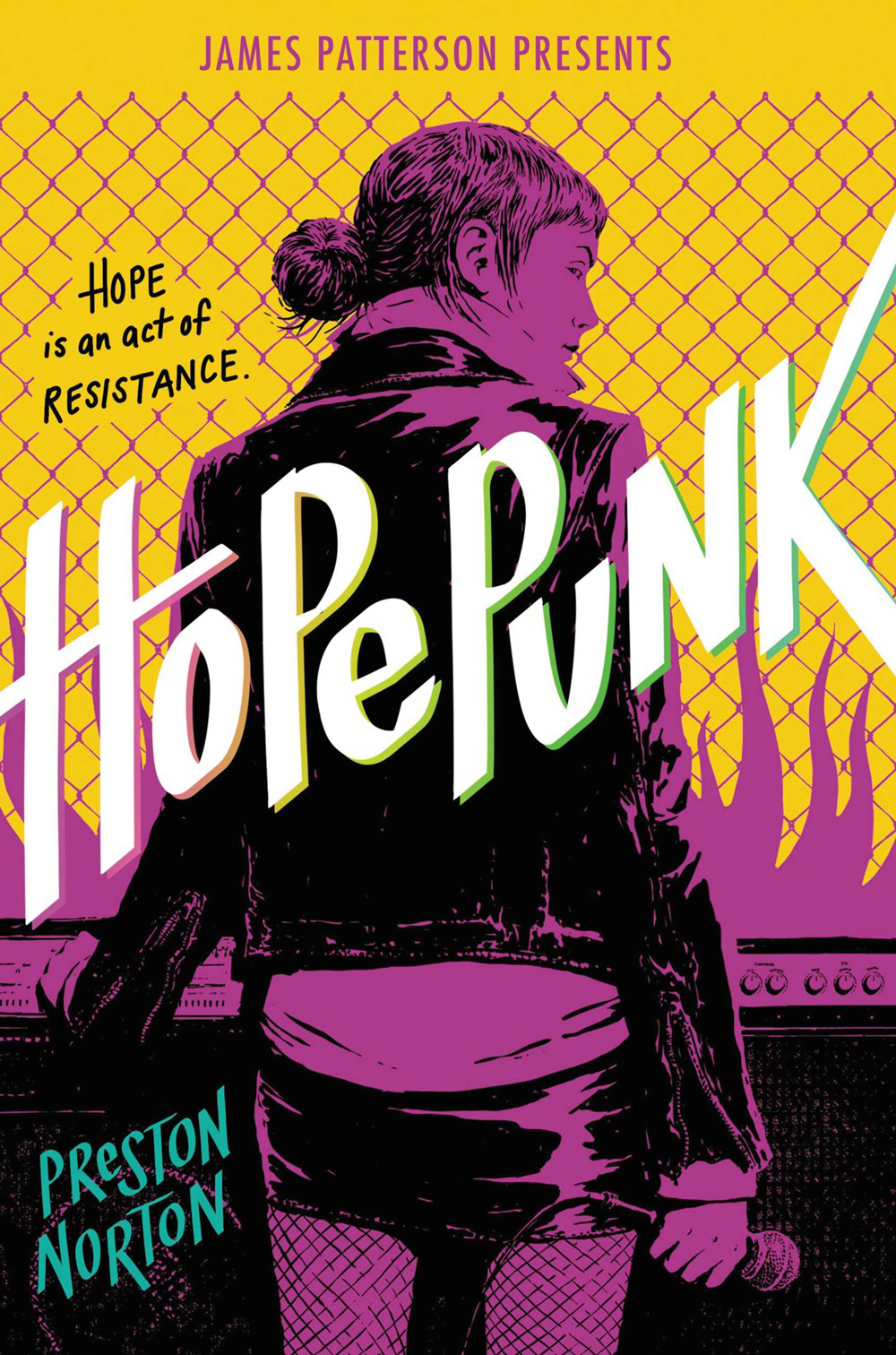 Preston Norton’s third YA novel is a profound and often profane exploration of family and forgiveness. Hopepunk is the story of Hope Cassidy, whose beloved sister, Faith, runs away after their mom tries to send her to a camp that practices so-called conversion therapy. While trying to track Faith down, Hope also discovers a love for forbidden rock music, forms a band, Hope Cassidy and the Sundance Kids, and enters her school’s Battle of the Bands. We chatted with Norton about his book’s nuanced depiction of religion and how they balance heavy themes with humor.

When did you begin to write Hopepunk?

In order to answer that, I feel like I need to address the elephant in the room, which is that the word hopepunk existed long before it became the title of my novel. I first heard it on Twitter, where a reader had compiled a list of their favorite “hopepunk” stories, and one of my previous novels, Neanderthal Opens the Door to the Universe, made the list.

Hope wears her heart on her sleeve. Where did her character originate?

Whenever I write in first person (which is pretty much all the time), I have a very difficult time not injecting a bit of myself into the main character. When you take a step back and look at my past three protagonists, you will find that they all wear their hearts on their sleeves, they cry a lot, and they have a bit of unchecked anger that could easily be resolved with counseling. All of these characters have someone they care about so much that it hurts—it almost becomes their entire identity—and when the people they love are hurt, the main characters sort of lose their minds. It’s by learning to care in the right way that they eventually find themselves. This is how you write a protagonist for a Preston Norton novel. Thank you for coming to my TED Talk.

The sisterhood between Faith and Hope is one of the relationships at the core of Hopepunk. What were the challenges of conveying their bond when one of them is literally missing for most of the novel?

To me, the trick was less about writing the relationship than writing the hole that forms when a relationship is broken. It doesn’t just break Hope’s heart. It breaks her entire family, and it breaks each of them in different ways.

It is really interesting to me to see the shape a person leaves when they are no longer there. Faith didn’t believe her presence made a difference, so it is very interesting and also very heartbreaking that when she runs away, all that seems to be left is her absence.

Initially it may seem like you’re pretty harsh on the subject of religion, but so much of Hopepunk is actually about forgiveness and faith. Why was exploring this duality important to you?

I have a very complex relationship with religion. On the one hand, I grew up in a religious community that I feel like represented the very worst when it came to homophobia and gaslighting and shame culture in Christianity. I am not religious anymore and have not been for a very long time.

I do see immense value in spirituality. I think we all need something to believe in that is bigger than ourselves sometimes. Not for any moral reason. I think we need it for our own happiness. To help us find equilibrium.

In that same sense, I feel like forgiveness—a concept that we often think of as “Christian” in nature—might be the most important ingredient to any one human being’s personal happiness. Even if it’s just yourself you need to forgive.

Many characters in the book undergo transformations, but Hope’s mom’s journey is one of the most meaningful. How did you avoid extremes when creating her character?

If Hope was the easiest character to write (because she is very similar to me), Hope’s mom was maybe the most difficult, perhaps because I have never personally met a person who has undergone a transformation quite like hers. But I am very proud of where she ended up because, at the end of the day, she is 100% someone I would want to have on my team.

Hopepunk is set in Wyoming. Why did you choose to tell this story in a conservative setting? Can you talk a little bit about the broader significance of telling queer stories in spaces like that?

I’ll be 100% honest. This story was almost set in Alabama, but then a conversation with my agent and editor drop-kicked it out of Appalachia and into the Rockies. We landed in Wyoming purely because of Sundance. (Yes, the band was called Hope Cassidy and the Sundance Kids before the setting had anything to do with Sundance.) When we finally pushed that puzzle piece into place, it just clicked.

Regardless of where the story could have been set, queer stories are needed everywhere because queer people are everywhere. I’m drawn to conservative settings because those are the places I’ve always lived. My hope is always to connect with just one reader in such a way that they feel seen, heard and understood. Maybe, if I’m lucky, I will have given them something that wasn’t there before.

Within Hopepunk is a second story, a lesbian sci-fi adventure called “Andromeda and Tanks Through Space and Time.” Was it challenging to incorporate this into the larger narrative?

I had so much fucking fun with this story! Maybe too much fun. There were many times when I was afraid that it wouldn’t make it into the final version of Hopepunk, and it is much more sliced and diced than it was in my original draft.

The greatest challenge was always selling my editors on this very weird little story within the story. When I try to explain it to people, I always bring up the “Carry On” story with Simon and Baz in Rainbow Rowell’s Fangirl. It is very different, obviously, but on a spiritual level, I feel like it is very much the same thing.

How did you balance the weighty themes and emotions in Hopepunk with the fact that it’s also often extremely funny?

This is very easy for me, because life is simultaneously so very funny but also so very sad. I think humor is my way of dealing and coping with sad and difficult topics. Humor allows me a safe distance to be vulnerable, but not so vulnerable that it makes me depressed and anxious.

Hopepunk is also about rock ’n’ roll and how powerful it can be to make music. In your acknowledgments, you mention that the songs in the book were going to be covers, but one of your editors pushed you to write original songs, which you found a daunting prospect. How did you pull it off?

I honestly have no idea. I don’t necessarily believe in miracles, but I also cannot deny that it must be some sort of miracle because I am NOT a songwriter.

With that said, I will readily admit that the third and final song in the book, “Love Can See,” was the most difficult one for me to write—so much so that I feel like I kind of cheated and borrowed the tune, time signature and lyrical beats of a preexisting song as a model for it. (But there is no actual tune in my book, so good luck suing me, mwahaha!)

I will have to award some sort of prize to the first reader who calls me out on Twitter for which song I used as a crutch. Would you like to be a minor character in my next book? I feel like that’s the only thing of value I have to offer. The contest begins NOW!

Hope quite literally finds her voice while singing karaoke at a local haunt. Are you a karaoke person? If so, what’s your go-to song?

I will sing anything and everything. I am a karaoke monster. I am not good by any means, but what I lack in talent, I make up for in loudness and staggering enthusiasm. There is nothing I won’t sing.

Science Fiction & FantasyFantasy
more info
Scotto Moore unpacks the myriad inspirations behind his “science fantasy,” Battle of the Linguist Mages, which more than lives up to the nerdy promise of its title.
read more

FictionFamily Drama
more info
With her roots in Puerto Rico and heart in Brooklyn, the heroine of Xochitl Gonzalez’s vibrant and raw debut novel finds that politics and family are hopelessly intertwined.
read more

Children's & YAYA FictionYA
more info
Acclaimed poets Irene Latham and Charles Waters give the past a voice in African Town, their new novel in verse about the last group of Africans brought to America and enslaved.
read more
All Interviews
Menu
Subscriptions
Menu